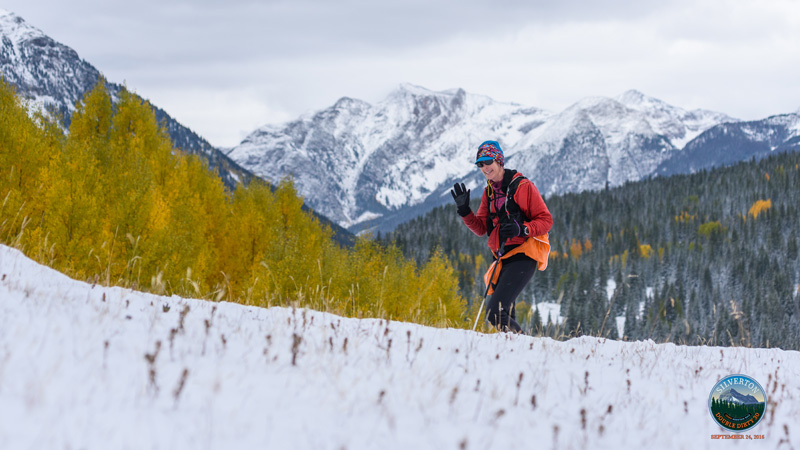 December 14, 2016 · Lynda Wacht
I sat in my car, watching it snow, as I chatted with my friend Dale, world renowned weather nerd. I was trying to get a feel for just how bad it was going to be. “Not great but improving” was about as good a forecast as we could come up with–Dale always emphasizing the difference between a “good” forecast and an “accurate” one. If I had only known when I signed up in February–who am I kidding, I still would have signed up.

I had heard rumors of this race for a couple years. A 100k in the breathtaking–literally and figuratively–San Juan mountains. Like many, I am in love with this corner of Colorado. The mountains are fiercely beautiful, steep, rugged, unforgiving. Her sister race, the Dirty 30, had her own reputation for being challenging, but this race–this race would far exceed that.

I had crossed paths with race director, Megan, over the years, first at Leadville, then as support at the Dirty 30. I loved her approach to races: that she wanted, strove for, planned on everyone finishing. I’m a confirmed back-of-the-packer, so this is of special significance to me. I have a DNF on every race I’ve attempted in that area, missing cutoffs on the San Juan Solstice and the Ouray 100. Ultras are hard to coordinate, to balance not abusing your volunteers, the souls of ultra races, with the desires of all runners to be able to finish. Megan’s passion, knowledge and experience makes this balance seem almost effortless.

I signed up as soon as I heard registration was open. It wasn’t really even a conscious thought. I knew this race was something I was going to do. I trained. I read every email. I studied the course.

When Megan added fund raising for Big Brothers and Big Sisters, it just made a great race even better. Ultra running is considered to be one of the most selfish pursuits a person can undertake, and for good reason. But the members of this community are among the most giving people I’ve had the pleasure of encountering.

“Go big or go home.” It was the perfect motto for the fundraiser, taken straight from the ultra-runner’s how-to-manual. It was truly inspiring how many of the runners jumped in and helped out. I wish that I could count myself among those who raised thousands for this cause.

And now I was at the start. I was way overdressed, as usual, at least for the start, my pack full of items I hoped I wouldn’t need–extra food and clothes, a satellite messenger for contacting people in case I was lost or injured, first aid kit. The headlamp, though, I was pretty sure I was going to need. A 22 hour cutoff almost guaranteed that. And I knew much of this race was remote and would climb twice to 12,000 feet, above treeline, exposed.

There was the potential for a lot to go wrong.

An easy six miles, belying the rest of the course, was a welcome beginning–at least I would run some of this race. The climb began in the aspens, the yellow leaves accented against the newly white mountains in the distance. My phone refused to take photos, so I had to content myself with simply absorbing the view. I would like to say the course climbed quickly to the vistas for which Silverton is famous–and, really, the course did, but I didn’t.

With thirty runners, I quickly found myself DFL (dead f—– last). It’s not my ego that’s bothered–I do count those sitting on the couch as my competitors and I was definitely beating them. But with so few runners and so many volunteers, I hated that I was keeping them out potentially hours after they could have been back. Their cheering and words of encouragement had me believing that they really did want me to finish as much as I did, and I did my best to keep my pace, eat lots, and keep moving.

The course is in a figure 8, the center point also the high point at 12,000. It was still cloudy but thankfully not windy when I finally reached it for the first go-round. The upside to being last: I got to drink all the remaining Coke and take all the chocolate, being no one else to feed and the aid station volunteers all too happy to not carry it down.

I welcomed the downhill–at least for the first couple miles. I settled into a steady pace, finishing out the southern loop of the figure 8. The sun, finally coming out, was now beginning to set as I entered the fourth aid station, the last before the final climb. I took the time to change into warmer clothes, mine damp, with sweat and maybe a bit smelly.

As I left the aid station and began the second and final climb to 12,000 feet, I started to feel nauseous. I had eaten a lot at the aid station (being last again and getting all of the quesadillas), but in retrospect, I didn’t drink enough. I swallowed a couple of Tums which seemed to help a little. I sipped at my water, finding it hard to drink and breath at the same time as I climbed out of the trees and into the wind.

I glanced at my watch and realized four hours had passed since I left the aid station. I stopped immediately and fished some gels out of my pack, forcing myself to eat them. I waited a few more minutes, then gathered myself up and continued the slog to the top of the pass. It was well into nighttime now and I was heartened to see a headlamp not too far in front of me, respite from the loneliness. I continued up, watching the light, my small beacon in the dark.

The winds picked up and I burrowed as best I could into my clothes, watching for the glowing trail markers and the footsteps that preceded me in the snow. Soon the wind had obliterated the prints, and I alternated between following the headlamp ahead and the glowsticks. It was close to midnight.

Not soon enough, I was over the pass, and headed gratefully down and out of the wind. I heard later it was about 10 degrees on the pass, and I would not argue with that number. Not much later, I overtook the headlamp, attached to a very fatigued runner. After making sure he had food and water and was, if not warm enough, at least not hypothermic, I continued to pick my way down, fatigue and the dark making progress slow.

I knew it was only a couple miles from there to the next aid station and I was sincerely looking forward to the people and more food, my nausea finally subsiding. The two miles passed, and no aid station. I went another mile. Still nothing. Concern began to creep into the back of my addled mind. I should have known the area, having done the July trail maintenance weekend in the same area. But the snow and darkness and fatigue rendered everything unrecognizable.

I pulled out my GPS, the route provided by Megan, proving her experience as a race directorin providing the download to all the runners. I saw that I was about a mile from the third aid station. Momentary confusion morphed into slight panic as I realized what I had done. The course was a figure 8–I had missed the turn on the pass. It was at least three miles back up, then another couple down to the fifth aid station. I wasn’t looking forward to the wind and the climb, but I didn’t have a choice. I’ve run hundred mile races. I knew I could do this if I stayed smart.

As I was putting my pack back on, two headlamps appeared on the trail in front of me and a voice called out hopefully “Are you looking for us?” It was Dan, a runner I had chatted with at the beginning of the race and his pacer, whose name I have regrettably forgotten. They had been lost for four house, attempting twice to go back to the pass and find the correct route down. Their GPS had long since died and they were cold and tired from the effort.

Half expecting their response (the one I was leaning towards), I told them I had a GPS and could get us back on track, but they were finished and looking for a quick way out. Unfortunately, at that location, there wasn’t a quick way. The closest aid station was a long drive from Silverton and finding a closer trailhead would require miles of hiking.

Once at a trailhead, getting a ride would fortunately be to do. Ever prepared, Megan had sent out in one of her numerous pre-race emails (it had been tempting to say ‘enough of emails!’ but they were so informative and upbeat) an email address to load into our satellite messengers. Someone in a warm room somewhere was monitoring the inbox, and I quickly had a response to my slow-typed text.

Stay put. Megan was on her way.

We paced back and forth in an almost futile attempt to keep warm in the dropping temperatures, dipping before the dawn that was due in a couple hours. Food and water just seemed impossible at that point, s \o there was much relief when the headlights appeared.

But the saga was to continue.

The runner I had passed had never caught up to us and was officially declared missing, along with two aid station volunteers who had been dispatched to search for him. The San Juan Search and Rescue team had been alerted and now needed help with communications, and of course, Megan is a HAMM radio operator. The three of us didn’t care that we had to stay until they were found–we were in a warm car and minutes from sleeping sitting up in the back.

Soon enough, though, everyone was found and we headed down, into the sunrise. We reached Silverton at 7am, a full twenty-four hours after we had begun our journey. Coffee from an ever-selfless volunteer, then a shower in the room the wife of the last runner to return, and I was almost normal.

I was bitterly disappointed in not finishing the race. I felt I had let down Megan and her amazing crew. I can’t say I regretted missing the turn, because I know it led to helping a couple of fellow runners, and that is ultimately what this trail running community is all about. There is always another year for the race and another adventure. I’ve already started the training for September 2017.